The Eagleroo is back in commission after a couple of days of being sidelined with a faulty (and yet brand new) alternator. As we drove the very first leg of our trip, the 130 miles from Indianapolis to Dayton, I noticed that the gauges were acting a little funky. Despite our full tank of gas, the fuel gauge hovered around an eighth of a tank. This made me nervous given the Roo’s recent fuel issues,  so we stopped to fill the tank in New Castle, Indiana. She took on a few gallons before the pump’s ‘shwoop-cachunk’ indicated that was all that was going in. As we steered back on to I-70 East, I noticed that the battery gauge mirrored the fuel gauge, hovering around an eighth of capacity. I wasn’t sure whether to hope that meant a faulty instrument cluster or a dying battery. Neither seemed ideal.

Our final preparations for the trip included installation of a second battery and a larger alternator. This will allow us to charge laptops and phones, run an electric cooler, and have other modern day electrified luxuries without sacrificing the ability to start the van–another luxury we’re feeling pretty attached to. To allow us to draw from the second battery (fittingly dubbed the leisure battery by second battery enthusiasts) without draining the battery that starts the van, the mechanic had installed a relay switch. He explained that when we stop for a few days, we want to push the button, thus disconnecting the batteries from one another. Then when we get going again, we flip the switch to reconnect the circuit so everything gets charged as we drive. We had both exchanged tentative nods as he relayed this information. Our eyes contained that glimmer of panic one displays when trying to force-feed information straight into long-term memory.

But as we drove along watching the gauges flag, I started to question whether we had it. Maybe the switch being flipped meant we were only charging the leisure battery while the time-to-make-the-van-go battery died of thirst. In desperation, I asked Slinky to push the button to see if that helped.

It did not help.

What it did do was to cause all of the gauges, speedometer included, to drop to zero. Wanting to evade the eighteen wheelers rapidly approaching in our lane, I flipped the right turn signal on. That’s when the van lost all power and went into coast mode. I tried to access the auxiliary power available to all human beings through simultaneous breath-holding and sphincter-tightening but, since that’s not an actual thing, that didn’t work either.

“The switch, the switch!”

She flipped the switch and the Roo woke up again like Chewbacca had hit the ceiling or Fonzie had pounded the dash. The speedometer climbed back up to fiftyish. The gas and battery gauges back to their dubious eighths.

We limped it the seventy remaining miles to Dayton with eyes glued to the battery gauge. Once we pulled into my parents driveway, I tried the key again. A little clicking, the bare minimum acknowledgement of my action, was all I got.

I’ll spare you the aftermath of phone calls and hand-wringing, both of which were plentiful. Suffice it to say that we now have a new, new alternator, a revised plan of attack for leg two of the trip and we even got to make the first leg of the trip (Indy-Dayton) again just to make sure we did it right.

Oh, and I got to reacquaint myself with my vocabulary of curse words. It remains a river that runs both deep and wide. 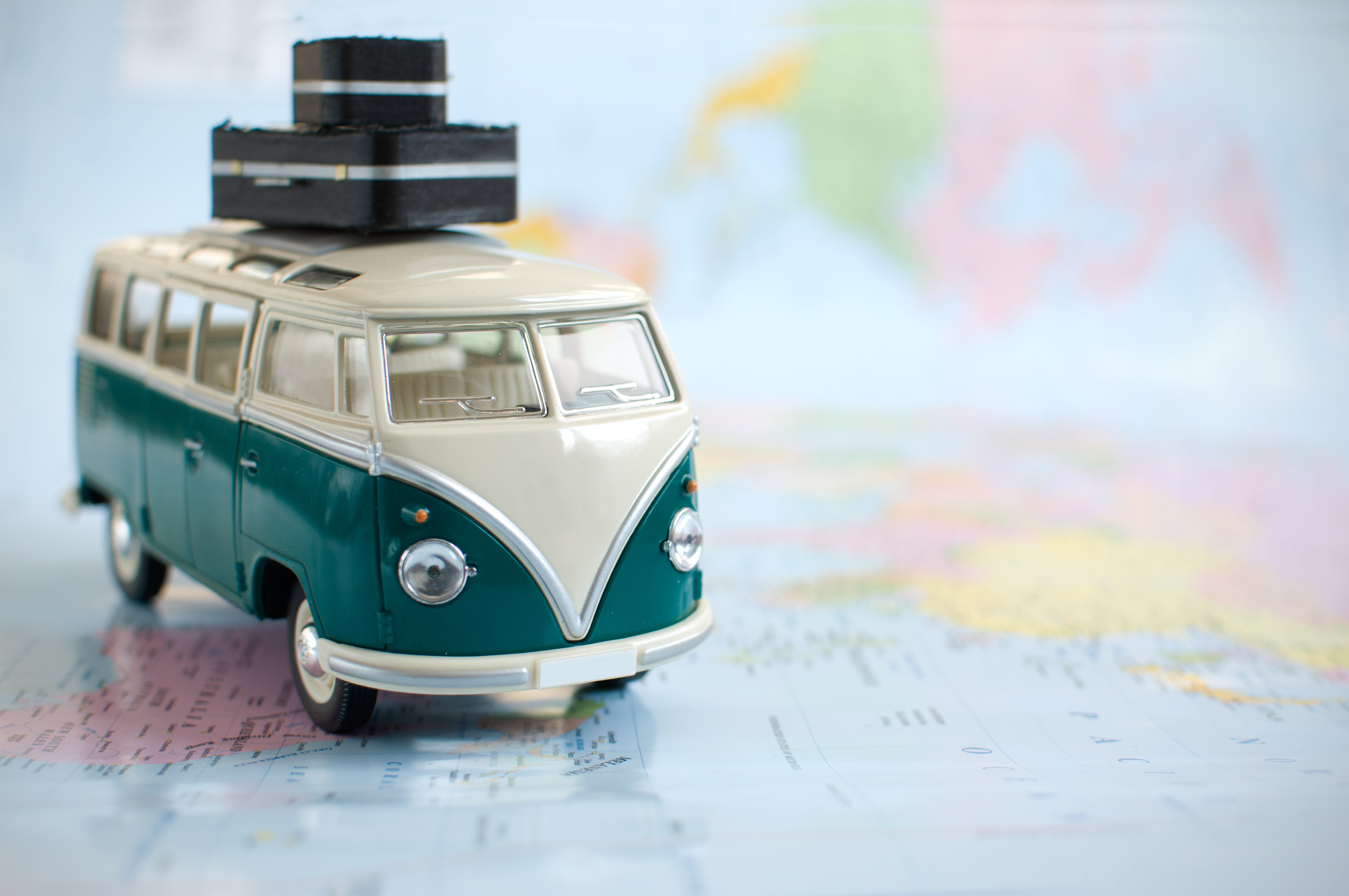 Our grand plan (or itinerary) started as us pipe dreaming about our trip. It included several bottles of wine, a whopping map of the US and hundreds of tiny 1cm x 1cm post-it note squares. We popped a post-it on EVERYTHING we wanted to see, and from that a reality (and possible route) was born.

From there, things got real. We had to provide a fully detailed itinerary along with my US visa application, and were lucky enough to stumble on the free, mostly user-friendly, road trip planning site Furkot. We mapped out possible dates and our most likely route – which looked like a lopsided infinity symbol across the country.

Our trip has taken many twists and turns along the way. Our original plan was three months in Indianapolis at the start, followed by an East coast loop, a three week break back in Indy, then a West coast loop. Then we found out Erik could only be out of Australia a certain amount of time if he wanted to apply for citizenship in the year after we returned so our trip got shortened…. then my sister got married in Australia half way through our planned Indy time… we were planning on crossing to Canada several times during our stay, until I was informed on arrival at LAX (despite differing advice received previously) that this was not OK, so Canada has now been crossed off and will likely be exchanged for a trip to London to get my visa renewed…  we had tickets to see Aretha Franklin at Chautauqua, then Aretha got sick and was replaced by Jay Leno who we have zero interest in seeing… the list goes on and things get chopped, changed and moved around. This is all okay: part of this adventure is learning to live life a little more flexibly, and not getting caught in the day to day.

We also want to be able to follow our gut instinct when we’re on the road and stop for a few extra days in one place if we are feeling the vibe, and move on faster if we’re not. Giving ourselves the room to be flexible has been a challenge. Not only because of our (my) inbuilt desire to plan, but also because some National Park camp sites require bookings about six months in advance, and, of course, people want to know when we’ll be landing on their door step.

But it is so exciting to be on the road after so much planning, planning, wine and more planning.

You can check out our up to date itineraries below, and follow along as they shift and change over the next six months.

So, we’ve spent the last month fitting, kitting and fulfilling our #vanlyfe dreams.

We start the trip in earnest this coming Saturday, but since we were lucky enough to be invited to the backyard music festival, ‘Rabscuttlooza’, in Rensselaer (Indiana) last weekend, we thought – given the ‘roo was 90% of the way there –  it was a good opportunity to give her a test run.

In preparation, we spent the whole of Friday evening spreading the entirety of our belongings over our friends’ living room (they may be unwilling to have us back after that little display!) before packing them into tubs and baskets. We packed our tubs and baskets into their van tub and basket holders. We made our bed. We turned on our electric esky (cooler).  We were ready.

We set off around midday and it was all smooth sailing until we stopped for gas. Erik was filling the van whilst I took a bathroom break. As I walked back toward the bowser (gas pump), I noticed liquid pouring out the bottom of the van as Erik was filling it. A short burst a drama ensued, as we quickly worked out that as we filled the van, a good percentage of the fuel was leaking out onto the asphalt below it. This was an alarming and depressing start, but after a quick Eagleroo inspection and conference in a McDonalds parking lot, we made a (quite frankly, rather ill-informed) decision to keep going and take it to a mechanic when we were back in Indianapolis. Fortunately, we managed to limp the rest of the way to Rabscuttlooza without further mishap.

We had a wonderfull afternoon, full of music, Mexican food, good company and a violent game called hammerschlagen (which you can read about here). Late in the evening, as we settled in to watch Donnie Darko (yep, Rabscuttlooza has a strong rabbit theme – it’s THAT Rabscuttle) the most intense storm I have ever witnessed rolled in. After a lightening strike put an end to watching Donnie D (and our friend’s entertainment system), it was time for bed. We were a little apprehensive about sleeping in our customised metal box during such a storm, but determined not to chicken out of our test run, so settled in to sleep to the sounds of pounding rain and thunder claps. However, this wasn’t what kept us awake during the night… and now we arrive to lesson one of road living:

We had managed to park the van so not only were our heads pointed down a hill, but we were also slanted to the side. So not only were we sleeping with a slight sense of vertigo, but Erik was also rolling into me all night and at one point I actually came off the mattress. It was a tough first night, but a solid lesson learnt. We’ve now downloaded a level app to our phones so we can make sure we are parked in a way that will ensure a decent nights sleep.

But, we made it! The ‘roo is currently back at the mechanic (we fortuitously had her booked in for a leisure battery fitting), so she will hopefully be back on the road on Saturday when we officially start our trip. Stay tuned.